This is a series about the design and construction of a murphy bed – a bed that folds into the wall and looks like a wardrobe. Previous posts:

In this post, I will cover the final stage of construction of the Murphy bed and challenges encountered along the way.

In part 2, I explored different joinery techniques and the options for knock-down joints. I wanted to make it possible to easily disassemble the bed. That turned out to be a difficult undertaking. Especially given the weight-bearing requirements from the heavy structure. Moreover, I realised that for the bed to look nice, it has to integrate visually into the room and be fixed to the wall. I consequently ditched the idea of knock-down joints and opted for pocket hole joints.

Because I designed the bed in Sketchup, I could easily generate a cut list with the Cutlist plugin for Sketchup. This is one of the many reasons for designing upfront in 3D.

Besides space restrictions arising from construction in such a tight space, building the mattress base and the enclosing frame went pretty smoothly. 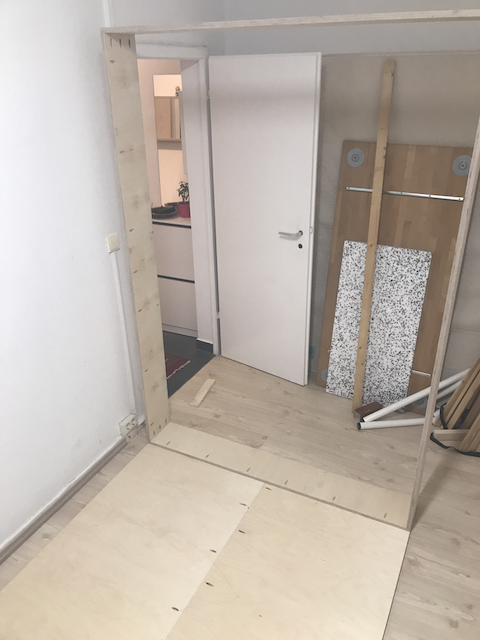 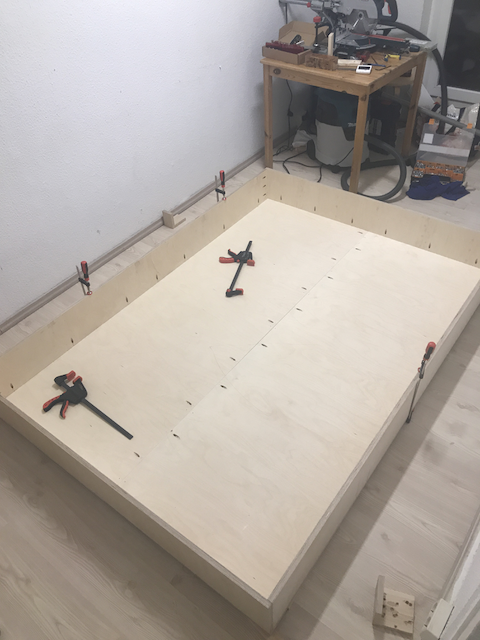 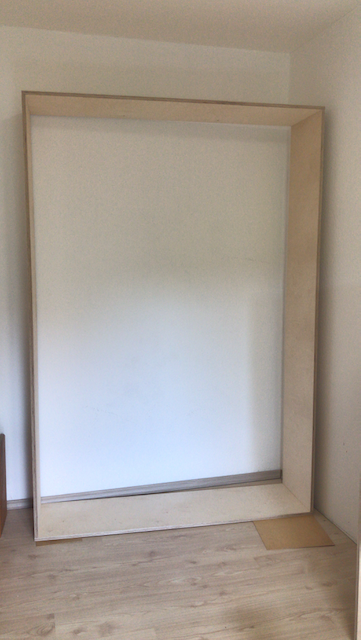 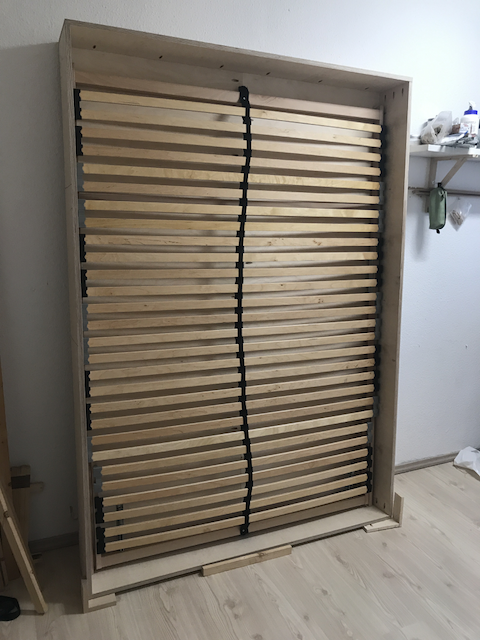 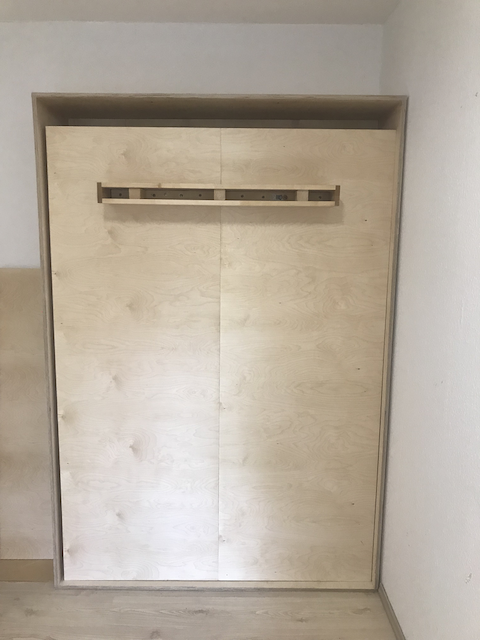 Unfortunately, during construction, I discovered a flaw in the design. The swivel hinge was thicker than the specification. I had to compensate for that by [routing](https://en.wikipedia.org/wiki/Router_(woodworking) both the enclosing and mattress frame so that the two swivels would fit. I solved one problem and created another. Routing weakens the outer frame of the bed, due to the reduced thickness of the plywood (18mm to 12mm). I solved that by doubling the thickness and gluing another plank of 18mm plywood on the outside of the frame.

For further robustness, I used threaded inserts and M6 machine screws to distribute the load evenly and maintain structural integrity in transition states of the bed when most forces are applied to the system as a whole. By dividing the system into two major components and a single pivot point I reduced the possibility for deviation from the desired motion. This proved to work well. 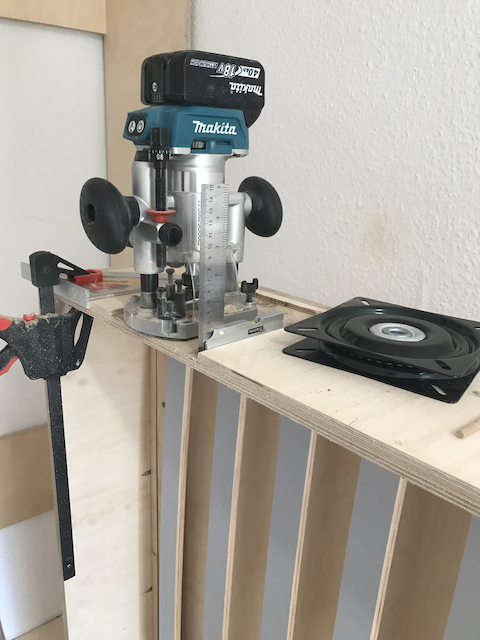 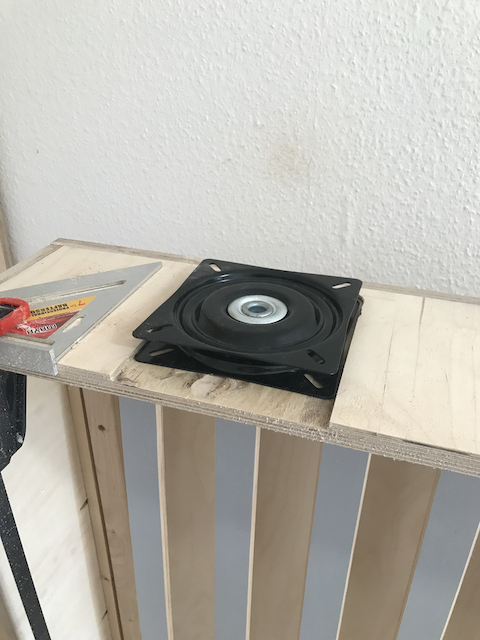 I decided to add a couple of details along the way. Small things that would improve the overall functionality of the bed. The first was a spotlight fixture at the top of the outer frame. Because it’s right above the head when sleeping, I opted for a remote-controlled dimmable light. I’ve had great experiences with the Zigbee system and decided to get Ikea’s TRÅDFRI bulb and remote controll (which comes with a magnet holder that can be fixed).

To utilise the space on the left of the bed, I cut shelves to size and fixed them to the bed and wall with wooden ledges.

Lastly, the multipurpose shelf and frame leg was closed and fixed. After sanding I applied some wax and the wood came to life. A truly exciting moment. 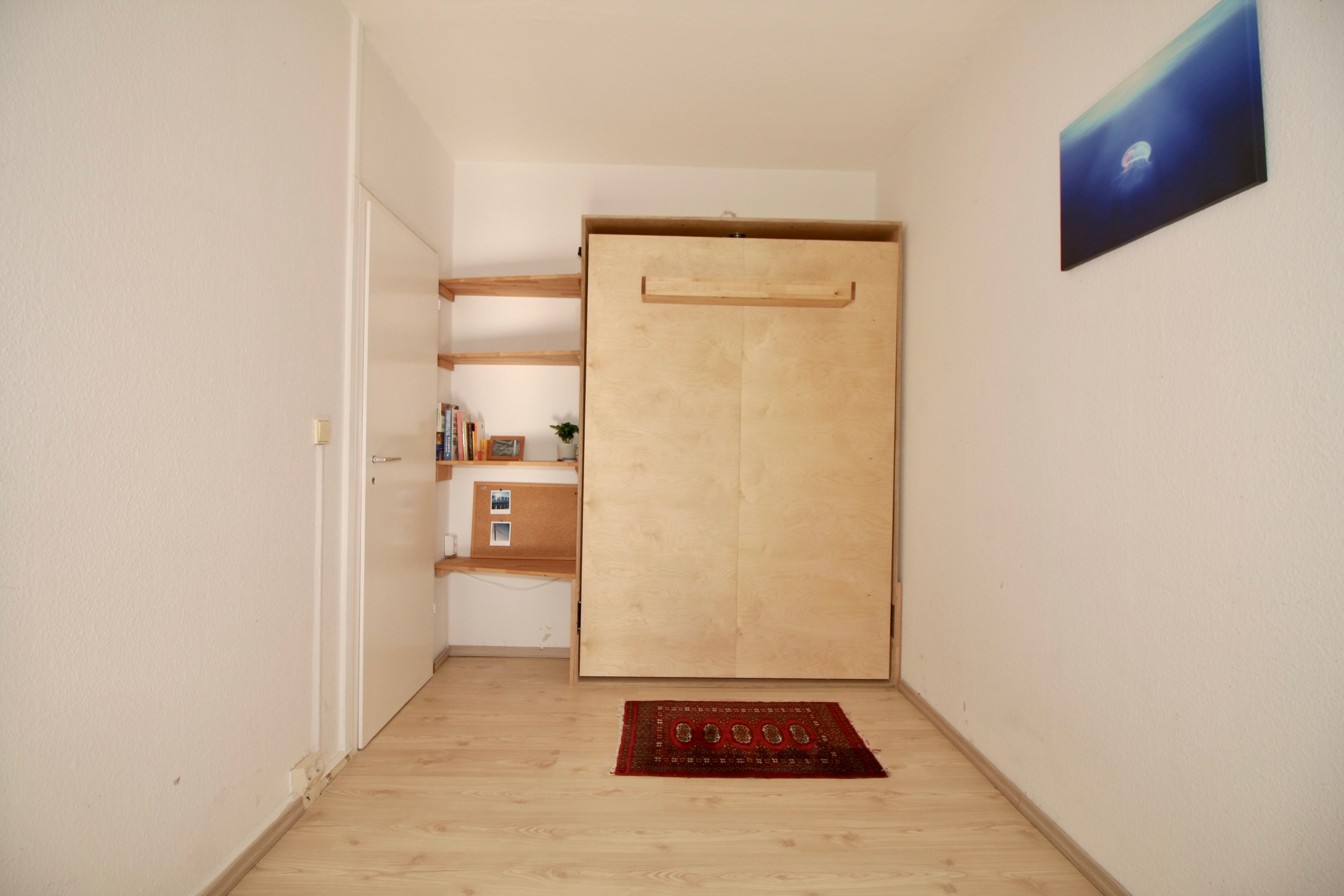 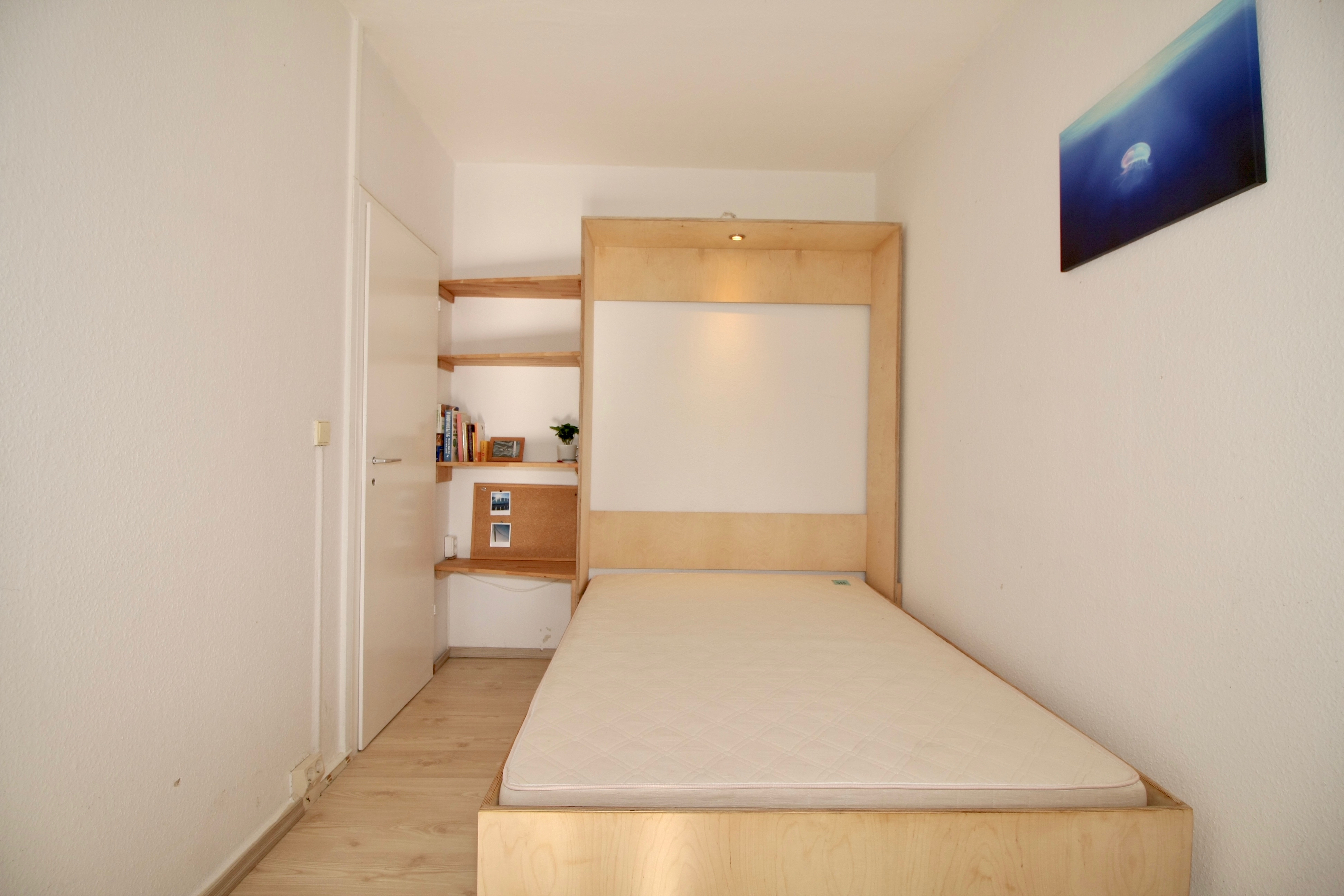 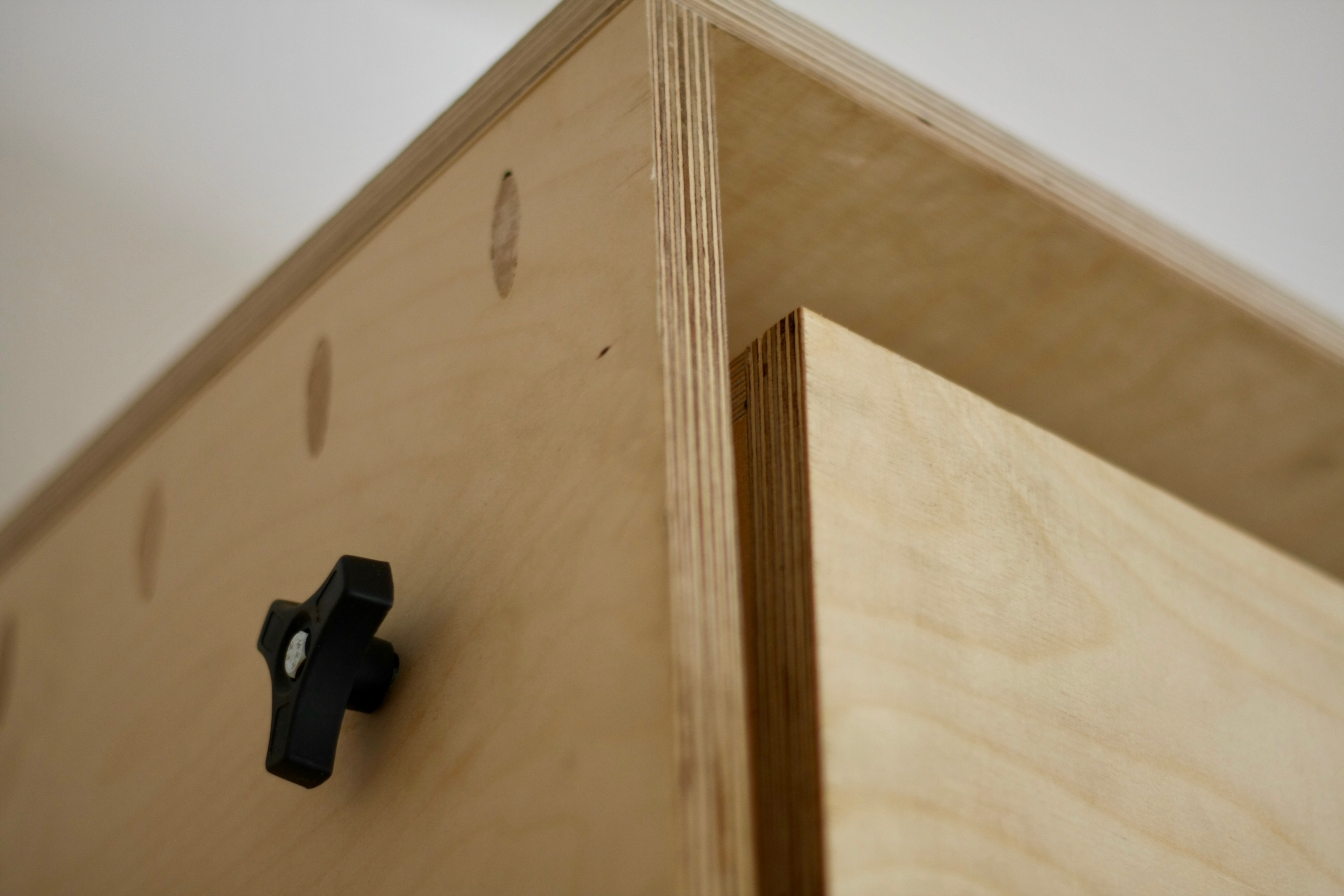 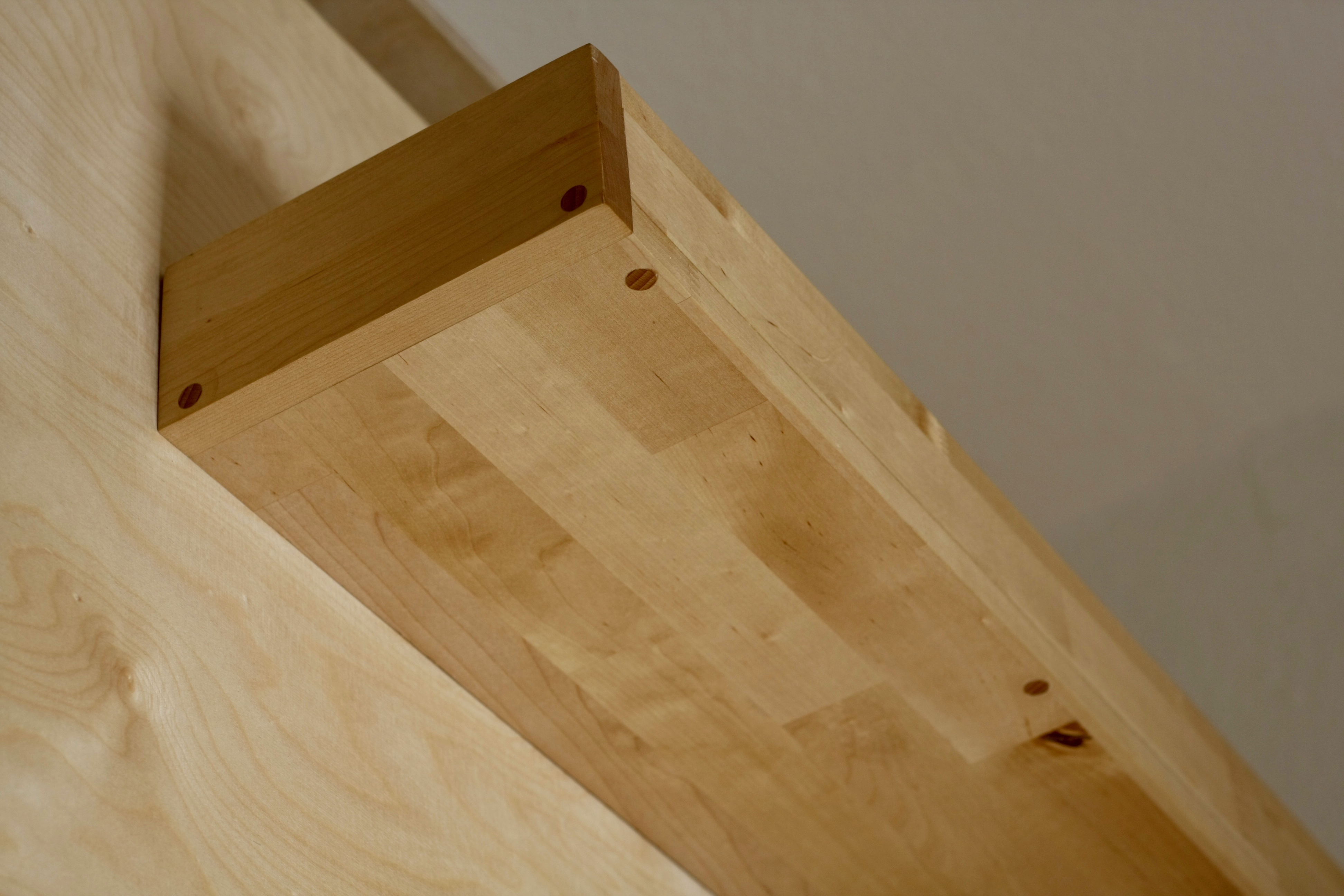 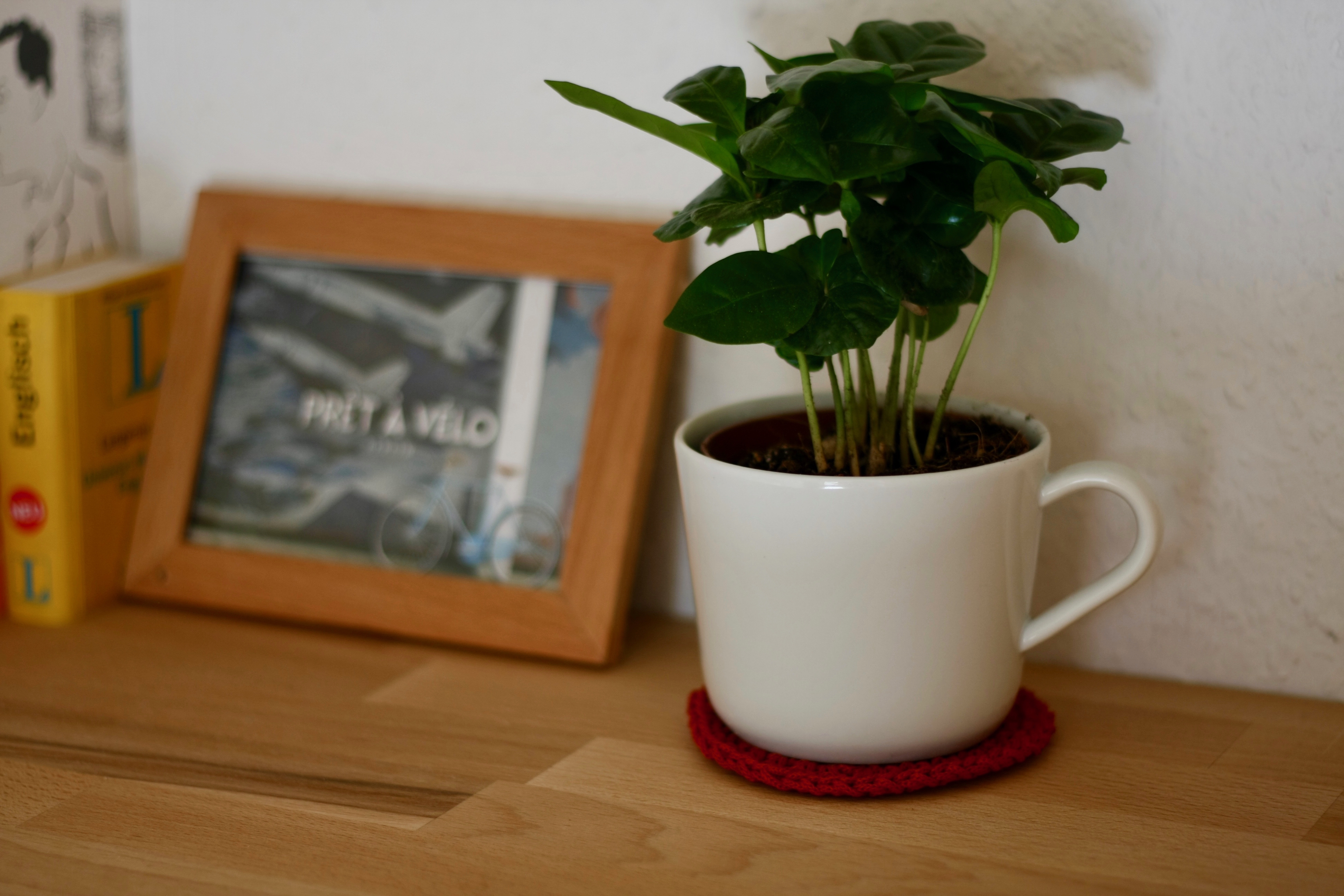 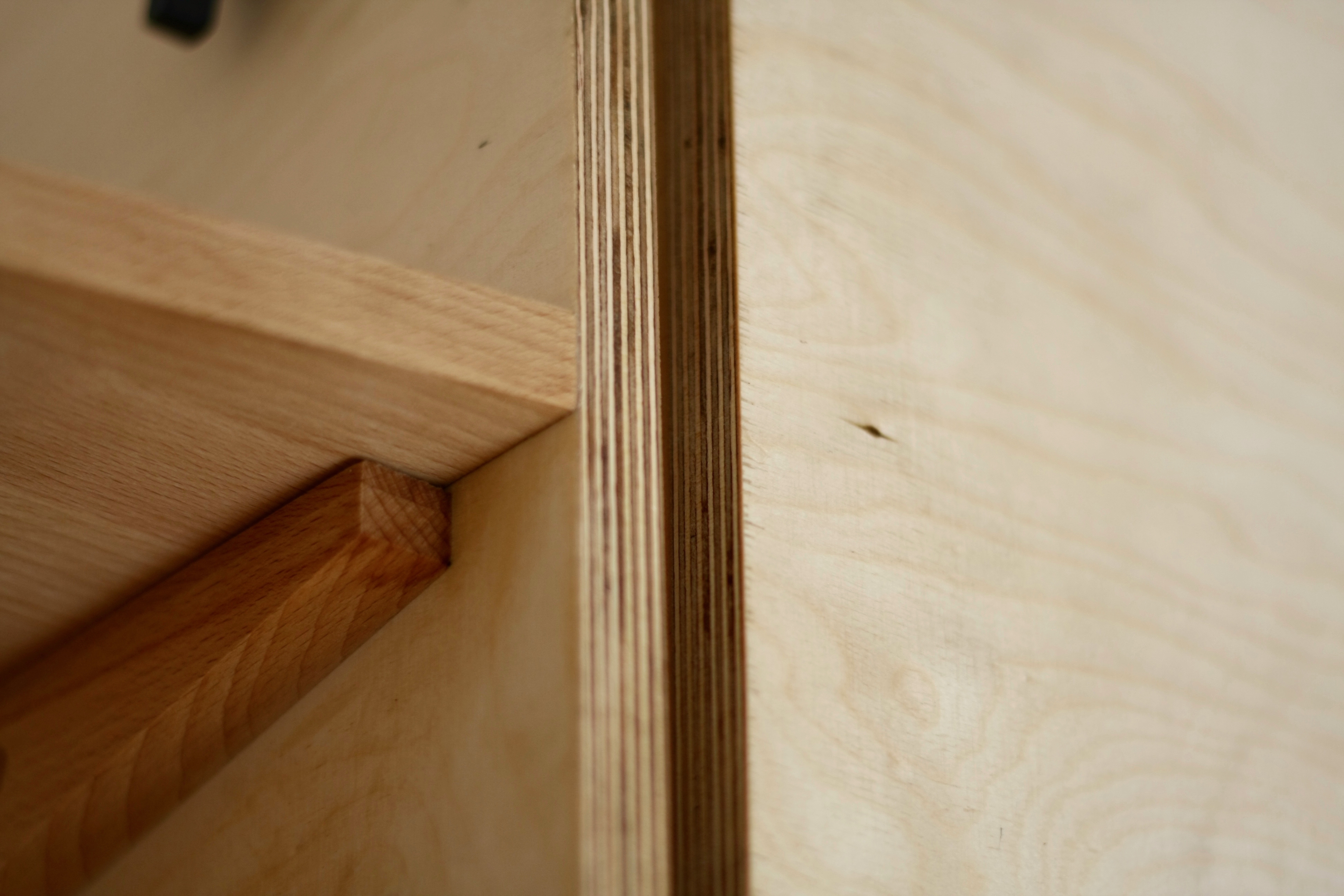 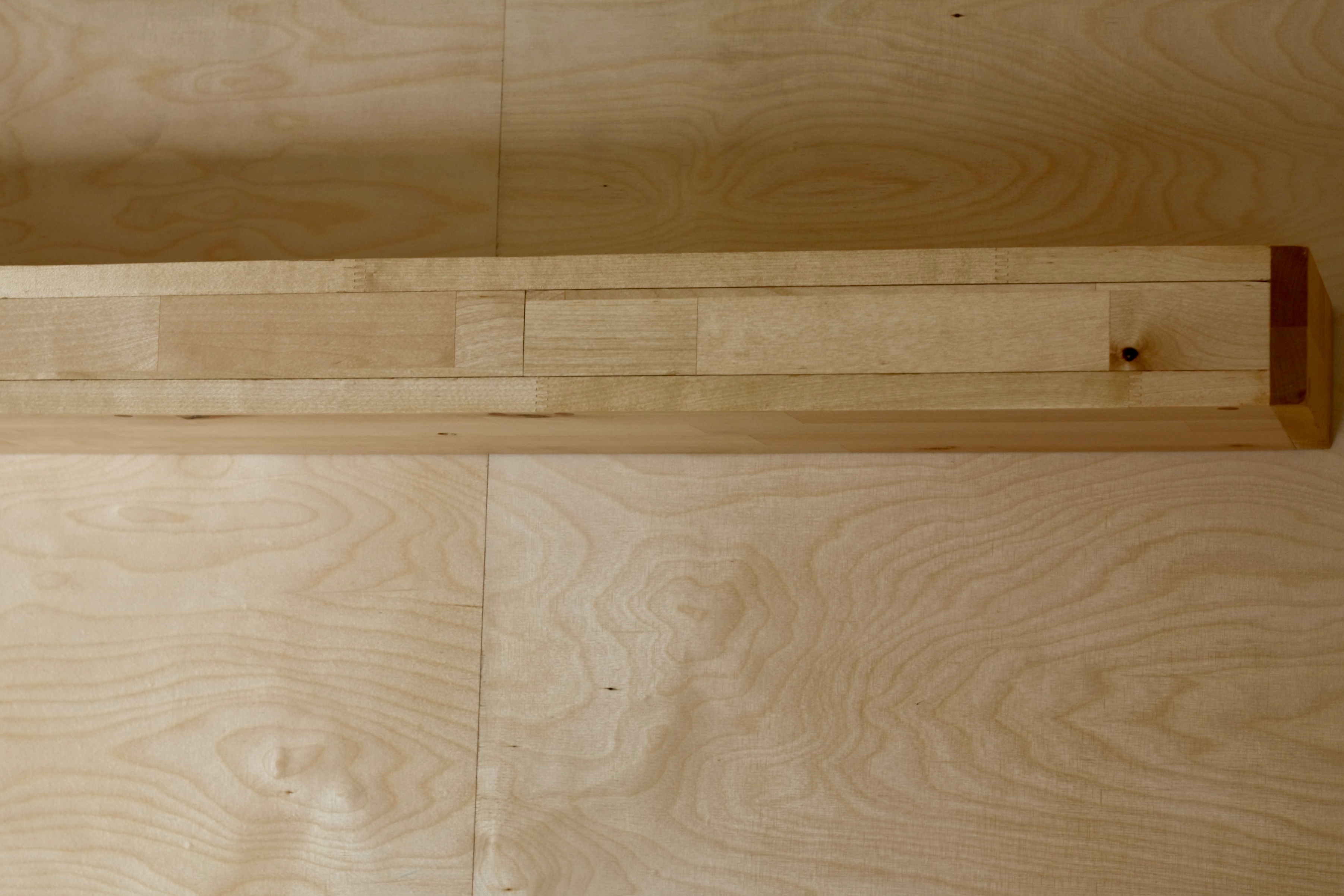 Seeing a long project come to an end is both satisfying and emptying. In hindsight, the closer I got to the end, the more it seemed like it would never end. This was a reminder that problems are inevitable. Staying committed to the process was equally important to me as was reaching the goal of a working design. Seeing as this was so time-consuming, I learned a thing or two about artisanship.

More broadly, the project got me thinking on the future of furniture and design at large. The 3D model of the bed had very little value until it was tested to work. Now that the design has been proven –at least to be functional– others can reuse the model at a negligible cost of replicating the model (digitally). In the consumer world, the word “design” implies more expensive; but it need not be that way. All things created are designed with intentions. Granted, some designs are better than others. But at its core, any design is a form of knowledge, namely the knowledge of what works in achieving its goal, be it aesthetic, functional or both. My experience as an engineer was useful in understanding the fine trade-offs at play. It turned out that this whole experiment in small spaces was about replicating so much pre-existing knowledge about things like the right height for the bed (I once had a bed made to order at height to create a 90-degree knee angle when sitting) or the ability to use these affordable swivels as the main hinge. To explore what was possible at a reasonable cost of material.

I was heavily inspired by the approach that the famous duo Charles and Ray Eames took in their exploration of materials as an essential building block in the design process. The combination of baltic birch plywood and with edge-glued beech panels created a nice palette of natural colours that symbiotically complements the green of plants. We spend a third of lives sleeping. It’s sensible to create the ultimate cosy experience if only for the fun and creativity its pursuit entails.