Every once in a while, I get nostalgic and think about the good old days. And often, while reflecting, my rational voice kicks in and reminds me that maybe they weren’t that good. Just think about the days before we had antibiotics, or how crazy people were to get on a transpacific flight loaded up with fuel and then smoke on it.

So I had one of these moments of nostalgia. I was reminiscing about my memories of discovering the Internet in the early 90s. We just got this white U.S Robotics 56k modem brought to us from the U.S. It had a large dial on the left side for the volume. We only had one phone line, which the modem would block.

I’d wake up early before anyone was up and sneak into my parents’ room, where the computer and modem were set up. I could never remember which direction to turn the volume dial to mute it, and often, I’d wake up my whole family with those horrendous dial-up modem sounds that now sound like a sweet blast to the past.

The Internet has changed a lot since — both positively and negatively. From a fringe playful virtual space to becoming the most critical information sphere we check in the morning. 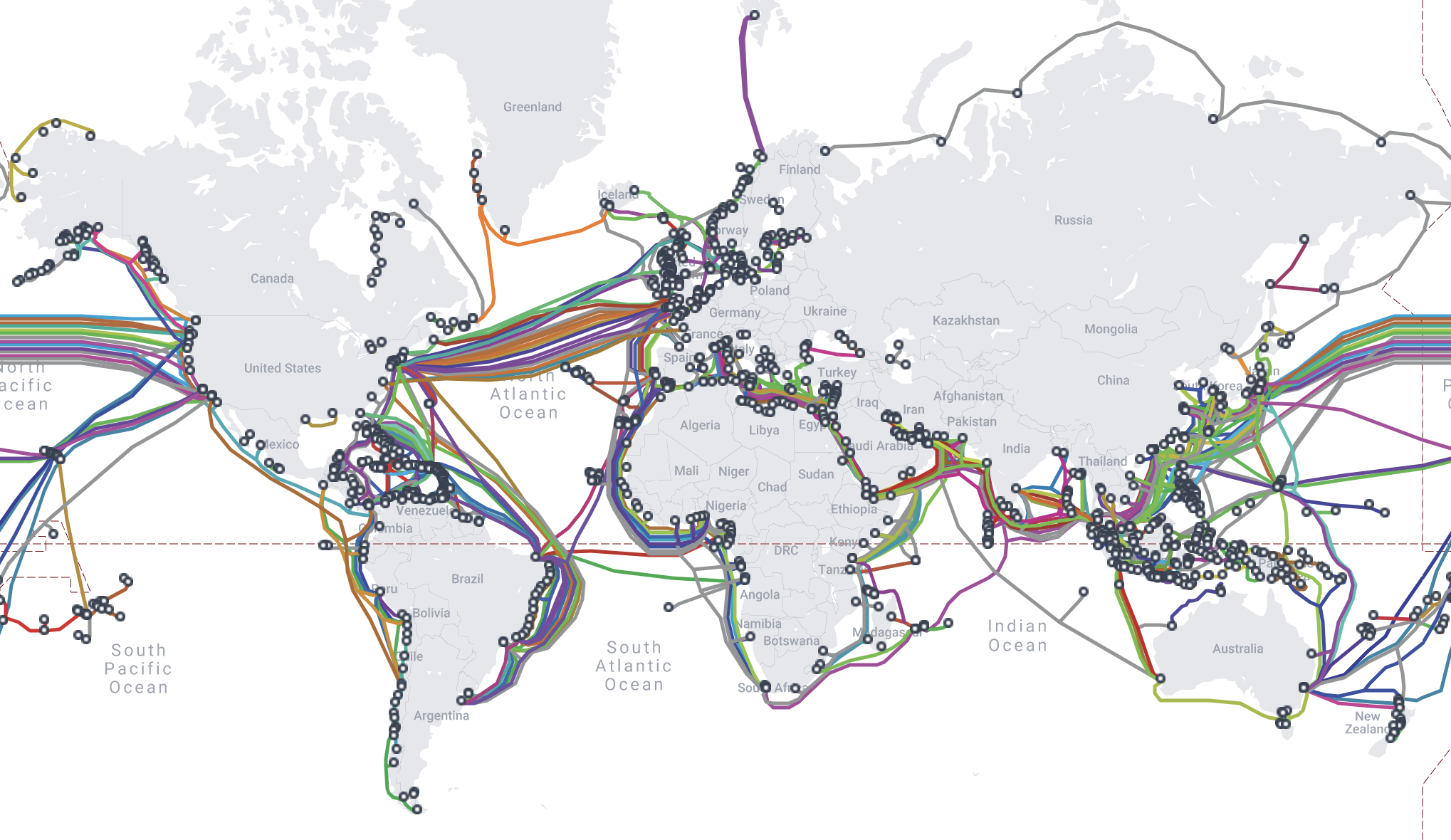 This pattern has repeated multiple times in recent history when a new technology uses an outdated infrastructure until the disruption and pressure were sufficient for the development of a new one. The new infrastructure not only makes the new technology truly usable but also improves the performance of the old one.

We now also have Internet native money with Bitcoin, ubiquitous encryption, and amazing projects like Wikipedia and the Internet Archive – a digital archive with the mission to give universal access to all knowledge. It’s easy to forget that it was nearly impossible to communicate securely and privately online 30 years ago.

It’s all fun and games until…

The Internet was revolutionary, and it arguably still is. But it’s changed. It grew from being fun and playful into something mature that has a dark side. We’re now at the stage where we’ve grown accustomed – and even dependent – to the utility and convenience it provides. All the while, we’re learning about the perverse effects it has on us as individuals and society. It’s entrenching political polarisation, becoming an instrument of mass control, and making us feel lonely while overloading us with more information than we can possibly handle.

The ever-accelerating pace of societal and technological change in the last decade has made the Internet a fertile ground for two kinds of warfare: information warfare and cyberwarfare.

What do I mean by information warfare? The Internet gives anyone a megaphone. One-to-many communication is as available to anyone as it’s ever been with blogs, Medium, Twitch, Twitter, Snapchat, Clubhouse, Substack, Telegram, YouTube, and many more. Not all of these platforms are equally censorship-resistant. But practically anyone with access to the Internet can spread their ideas, irrespective of whether they’re true. So we’re left to make sense of a world full of conflicting information thrown at us.

Back in the good old days

In the good old days, the web was much smaller. Google didn’t exist, so you’d rely on index sites to find things. Everything was slow. When my primary school got a “fast” ISDN connection, I’d spend after-school hours at the computer lab exploring an alternate reality: the Internet. You could pretend to be a different person and chat with others, also pretending to be different people. It was a space where you could be both weird and safe from the real world’s chaos and challenges, which I was learning about through the Internet.

Having worked in Adtech (advertising technology), I’m intimately familiar with the extent to which information is collected on users. You’re constantly watched everywhere on the Internet. Our behavioural patterns are analysed by algorithms that then show us exactly what we want to see - a projection of our fragile egos. This is probably not news to most of us. We even have new terms to describe our predicament: surveillance capitalism and techno feudalism to name a few.

However, the reality is more complex than a simplistic narrative about evil companies. [FAANG] companies have a problem with incentives – their “free” products aren’t really free. In fact, you are the product in the form of your data which they essentially sell to advertisers.

Furthermore, it seems to me that most people are happy to give their data away. Remember the 2016 Pokémon Go craze?

“Pokémon Go is a virtual reality game for mobile phones. It uses GPS to locate, capture, train, and battle virtual creatures, called Pokémon, which appear as if they are in the player’s real-world location. The game is free-to-play; it uses a freemium business model combined with local advertising and supports in-app purchases for additional in-game items. It was one of the most used and profitable mobile apps in 2016, having been downloaded more than 500 million times worldwide by the end of the year. The game had over a billion global downloads by early 2019, and grossed more than $6 billion in revenue as of 2020.” ~ Paraphrased from Wikipedia

Pokemon Go is a cautionary tale. A fun new technology that quickly becomes questionable. Pokemon Go had over a billion downloads – that’s about every 8th person in the world who left their home on an adventure to capture virtual characters. If that’s not some kind of collective mania – I’m not sure what is. But perhaps it’s just innocent, fun, and playful?

The road ahead - decentralisation

I mostly wrote this blog post as a primer on how I see the future of the Internet and the technologies that aim to make it better.

In a previous article, published 3 years ago, I argued that decentralisation is the path towards a healthier Internet – one that puts the power in the hands of individuals.

Since then, there’s been tremendous progress on many projects/networks in the decentralisation space that I highly recommend checking out:

Each of these projects is worthy of several blog posts on its own. But I think these are going to play a more prominent role in the future of the Internet.

As of 2017, approximately 1.7 billion people remain unbanked in emerging economies. In the near term, I can see Bitcoin and Ethereum being the leapfrog solution to banking the unbanked.

Without getting too bogged down by the technical details of each technology mentioned above, I’ll share what I see as the two main hurdles for mainstream adoption:

Additionally, I’ll explore the solutions being developed to solve those.

A crypto wallet is simply a unique long number also known as a private key that allows you to store your coins, create transactions, and interact with the network. In reality, it’s a bit more than just a private key – it’s also the software that uses the private key to create the transaction.

This is where the user experience problem begins because there are so many misconceptions about this.

Creating a crypto wallet is a matter of installing an app on your phone. The first time you open the app, it will create a new private key. Once created, you essentially opened a bank account that is controlled by this private key.

While software wallets are great, they are also more prone to attacks. At the time of writing the highest security is offered by hardware wallets like Ledger and Trezor. These are devices that do two things:

Both software and hardware wallets have this notion of a recovery a recovery phrase –also known as a seed phrase–. This is a 12 or 24-word sequence that is displayed when you create a new private key and can be used to recover your private key. Typically it’s written on paper and stored in a safe.

If you change phone or lose your hardware wallet, you enter the recovery phase into the new device and regain access to your funds.

More broadly, using Bitcoin and Ethereum comes with more responsibilities than the traditional financial system because as a user you are self-sovereign.

Here’s the problem: if lose your key, you lose your funds.

Many rely on exchanges where they buy coins as their custodian. This approach works, but you risk losing your coins if the exchange gets hacked (as has happened many times).

Moreover, because these networks are open-source, there isn’t a single company developing crypto wallets. Instead, there are many wallets with different features but are all interoperable. Kind of how it doesn’t matter whether you use Firefox, Chrome, Brave, or Safari as your browser because they all use open standards.

Choosing a crypto wallet is like shopping for veggies and fruit at a farmer’s market. Any farmer can come and sell their veggies. Similarly, you have many wallets to choose from without clear guidance on which is best suitable for your purposes.

Social recovery wallets like Argent have been getting more attention recently, and I think they might be one of the main catalysts for mainstream adoption.

Social recovery wallets are self-sovereign crypto wallets that allowing the recovery of your private key in the case of loss or attempted theft. They do so by letting you choose friends and family from your real-world social network as trusted guardians who together can assist in key recovery.

I should note that social recovery wallets are currently constrained to Ethereum because they are, in essence a smart contract deployed to Ethereum.

In summary, a bad user experience has been deterring people from trying out these novel technologies. You have to choose a wallet, understand the trade-offs and learn how to safely store your key. The user experience has been improving significantly with better UIs that abstract the technical details and the development of social recovery mechanisms.

Scalability is a measure of how many interactions these networks can serve. Typically this is measured using TPS (transactions per second). For example, Bitcoin can process 7 TPS. Ethereum can process about 15 TPS. In comparison, Visa processes about 1700 TPS.

This has made usage of Bitcoin and Ethereum quite expensive. Currently, a simple Bitcoin transaction fee is around $1.1, while the fee for simple Ethereum ETH transfer costs $6.4.

Scalability being one of the main challenges for both Bitcoin and Ethereum, has given birth to many solutions that aim to maintain the security offered by the networks while significantly increasing the scalability of the networks in orders of magnitude.

For Ethereum, Rollups are poised to be the main scalability solution in the foreseeable future. At the time of writing, there are numerous Rollup deployed on Ethereum that signifcantly reduce the costs of transacting to under a dollar.

The Internet has matured and lost its innocence since the early 90s. Much like our development, we grow up, lose our youth, and discover the complexities of life. As much as I love the modern Internet, I often miss the good old days.

At the same time, there are so many exciting new technologies that are making the Internet a better place.

Granted, Ethereum or any of the other technologies won’t solve all the problems. But they provide an alternative space to create, build communities, and make the Internet fun.